Skip to content
The ‘Pacification’ Of Poland By Nazi Germany

From “The Devil’s Alliance” by Roger Moorhouse

“The first priority for the German authorities in Poland was to ensure that the Polish elite – religious leaders, teachers, military officers, intellectuals, even Boy Scouts – was effectively neutralised. To this end, the rather random killings of the early phase of occupation became more targeted and more overtly political in motivation. In the so-called ‘Valley of Death’ near Bydgoszcz, for instance, in October 1939 over 1,200 priests, doctors and others were killed by firing squads of the Einsatzgruppen and local ethnic German militias. In total, actions such as these, ‘pacifications’ in Nazi parlance, would account for as many as 50,000 Polish deaths in that first autumn and winter of the German occupation. 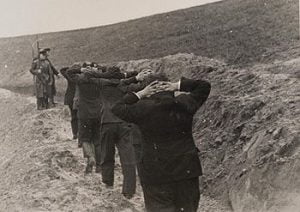 November 1939 saw Sonderaktion Krakau (‘Special Action Kraków’), when Nazi cynicism matched Nazi barbarism. At midday on the 6th of that month, the entire staff of the prestigious Jagiellonian University – one of the oldest universities in the world – were summoned to a meeting with the new Gestapo chief for the city, Bruno Müller, to learn about the Nazis’ plans for education. Rather than hear a lecture, however, the assembled 184 professors were summarily arrested and taken for interrogation, after which they were sent, en masse, to Sachsenhausen concentration camp outside Berlin. Though they would be released the following spring after international protests – not least from Benito Mussolini and the Vatican – some sixteen of the Jagiellonian professors would not survive their ordeal. The university itself was closed, meanwhile, along with all of Poland’s secondary and higher-educational establishments, for the duration of the Nazi occupation. Poles would require no more than the most rudimentary learning. 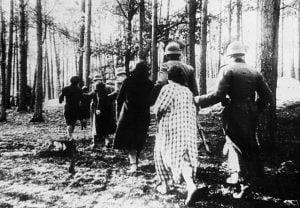 In the spring and summer of 1940, the Germans began another way of repression in their zone of occupied Poland, to remove so-called ‘leadership elements’ from what remained of Polish society. The resulting AB Aktion, or ‘Extraordinary Pacification Action’, followed what would become a familiar pattern. Prisoners were removed from their cells in local jails; a charge, verdict and sentence would be read out; and they would be taken by truck to nearby woods, where they would be executed with a shot to the head, or machine-gunned, into waiting pits. In this way, 358 prisoners from Pawiak prison in Warsaw were killed in Palmiry Forest in June 1940; 400 were killed near Częstochowa in July; and 450 people were murdered near Lublin on the night of 15 August 1940. In total, it is thought that the AB Aktion cost around 6,000 lives.”